Some interesting forest gardens around the UK

Nancy and Graham Bell planted their forest garden in the Scottish borders in 1990, making it one of the oldest forest gardens in the UK.  They began the garden by creating randomly curvy raised beds on the grass and linked these with paths.  Over the years the garden has been planted with many interesting edible species and matured into a beautiful and productive space.

Such a wide assortment of trees and plants means that more than twenty five years the garden is a robust and well balanced system that produces large amounts of produce each year (1.25 tonnes in 2015).

Maddy and Tim Harland publish permaculture books and Permaculture Magazine.  At home in Hampshire they have a twenty five year old forest garden that they planted on a former agricultural field at the end of their garden.  It had been used for intensive crop production for years and the soil was in poor condition.

Robert Hart’s vision was their guiding light in those early years and they also took inspiration from local woodlands of beech and ash with hazel and wild currants beneath and a mass of wild flowers on the woodland floor.  They used this model as a template for their own garden, replacing some of the woodland species with trees and plants that would be more useful to them and their young family.

“We chose a wide range of edible plants and tried to fit as many as possible into the available space.  We also selected some for their beauty as we both feel our garden should have an aesthetic quality rather than just being functional.”

The Harland’s approach was to heal the soil first before planting many of their long term trees and bushes.  In their words with “soil like an open wound” they “covered it with a dressing of native wild flowers to give it a chance to heal”.

Working with their forest garden for 25 years Maddy has found that people connect with the forest garden idea on an almost subconscious level and that it speaks to something deep within us.  “We have gone from an abused and empty field with barely any soil to an oasis of wildlife that feeds our bodies and souls every day of the year. Every year the yield increases as does the biodiversity. 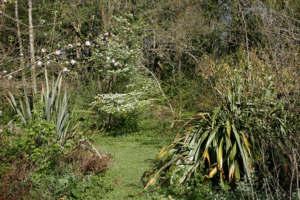 This garden was established in 1994 by Martin Crawford on the Dartington Estate in South Devon.  In a 2 acre field a demonstration forest garden has been planted comprising many different levels of trees, shrubs and ground covers, all coexisting and producing useful products such as fruits, nuts, medicinal products etc.

The forest garden is self-sustaining, containing a very diverse number of species and thus very resilient to pests, diseases and the vagaries of the climate. It provides a wide variety of fruits, nuts, edible leaves, medicinal plants, poles, fibres for tying etc.

It is self-fertilising by the use of specific plants which supply nutrients: nitrogen-fixing trees and shrubs (particularly Alders and Elaeagnus) which can utilise nitrogen directly from the air and make it available to other plants; and dynamic accumulators (particularly coltsfoot, comfrey, sorrel) – deep-rooting plants which tap phosphate and potash sources deep in the subsoil, raise them into the topsoil layer and make them available to other plants.

Around 140 different species of tree and shrub crops has been used to form the ‘canopy’ layer of tallest trees and shrubs. These range from common species like apples, pears and plums, to less common ones like azaroles, chinkapins, cornelian cherries, highbush cranberries, honey locusts, Japanese pepper trees, medlars, mulberries, persimmons, quinces, strawberry trees, and sweet chestnuts. An area of basketry willows has been planted in a wet area of the site.

Shrubs of varying sizes occupy much of the space beneath trees, including the more common bush fruits (currants and berries) and others such as barberries, elaeagnus, Japanese bitter oranges, Oregon grapes, plum yews, and serviceberries.  Many of the understorey shrubs are nitrogen-fixers.

In the latter years of planting, the grass ground cover has gradually been replaced with other ground cover species of use.  The main species used for ground cover include: bamboos, especially dwarf species; carpeting species of rubus (blackberry family), gaultheria; herbs; deep rooting perennials such as comfrey. 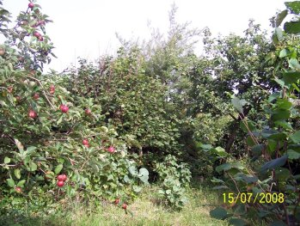 The Towans is an ongoing project to restore a plot of land described as “land with extremely severe limitations that cannot be rectified” in the official soil survey of 1979.  Started in 1982, the project follows the principles of permaculture and uses the techniques of agroforestry to maximise the production of food on the land.

Raymond and Sylvia Yarwood have lived here since 1975.  They are forest garden pioneers from the Robert Hart era who have established a great range of plants in a challenging environment.  The first priority was to establish a substantial windbreak and to use plants adapted to the sand dune conditions.  Eventually conditions became suitable for a wider range of forest garden plants including: 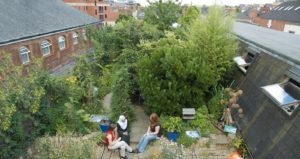 This is an exceptional and unusual forest garden on the roof of a community organisation in the centre of Reading.

“The garden is now so much part of RISC’s identity that it is easy to forget that it was a leap into the unknown… could fruit and nut trees grow on a foot of soil, would the structure take the weight, how could we integrate it into our education work… ? We should have trusted in nature. The garden gradually revealed its secrets – the countless stories embedded in the plants and hard landscaping that attract visitors from far and wide.”

Explaining the intention behind the planting scheme, Dave Richards says:

“Our centre works with schools and community groups to raise the profile of global issues such as sustainability, human rights and social justice.  We wanted the garden to make a link with that which gave birth to the theme of ‘global education; plants with a purpose.”

Even though the garden is small and constrained by the weight of soil that can be laid onto the roof it is home to plants from every continent most of which are edible and many having other uses as well.  They include sweet cherry, peach, hawthorn, chokeberry, wineberry, lemon, loquat, chocolate vine, Japanese stauntonia, bamboo, aloe vera, marsh mallow, Welsh onion, yam, Babington’s leek, fennel, good King Henry, sea kale, mint, ground nut, sunflower, chilli, nasturtium and oca.

In line with RISC’s mission the garden is frequently used as what Dave Richards calls a “learnscape”.  “A place where pupils could spend time exploring all the subjects of the curriculum within the context and setting of a human-made landscape that is inspired by nature.

Karuna Forest Garden is home to Janta and Meerav Wheelhouse.  It covers 18 acres on top of the Long Mynd in south Shropshire at an altitude of 300 metres.  Their vision is that they “want to live in a forest that provides everything – food, shelter, energy, medicine and all the other necessities of life.  Above all we wanted to create a truly healthy place with a cleansing, healthy energy”.

After arriving in 2006 the couple planted nine acres with over 50 species.  More have been added every year and there are now over 10,000 trees on site.  The edible plantings of fruit and nut trees, edible shrubs and ground covers have been planted on the edges of the main blocks of woodland so that the forest garden emerges from the forest in a natural way.

The couple host forest garden and permaculture courses on the site.

Simon Miles and the forest garden at Falmouth, Cornwall – sells trees and plants as well